Agriculture remains one of Australia’s most dangerous industries

This week is National Farm Safety Week, and according to Safe Work Australia statistics, there’s still a lot of work to be done to make the agriculture, forestry and fishing industries safer.

As at 20 July, 2017, 21 people in the agriculture, forestry and fishing industries have lost their lives at work, and 41 in total died during 2016 (Figure 1). The latest Safe Work Australia data is based on initial media reports and is a preliminary estimate only but so far, it reflects the final figures of 2003-2015 where the agricultural industries had the second highest level of fatalities nationally.

As 2017 National Farm Safety Week got underway, Assistant Minister to the Deputy Prime Minister, Luke Hartsuyker, encouraged farmers and rural workers to keep their safety, health and well-being front and centre all year round.

“Agriculture is the biggest employer in our rural and regional communities, so farm safety should be a priority for everyone in the sector,” Mr Hartsuyker said.

“While the government will continue to work closely with industry and peak work safe bodies to address farm safety, it is everybody’s responsibility to ensure farm health and safety is treated as a priority and that proactive steps are taken to recognise warning signs and mitigate any risks.

“One of 2017 National Farm Safety Week’s main focuses was quad and vehicle safety, given tractors, other machinery and quad bikes are the leading causes of deaths on farms.”

According to Safe Work Australia’s Work-related traumatic injury fatalities, Australia 2015, between 2003 and 2015, there were 744 agricultural fatalities in total, or 23 percent of all worker fatalities. Of those, 247 died in a vehicle collision or rollover. In 2015 alone, there were 52 fatalities (Figure 2). 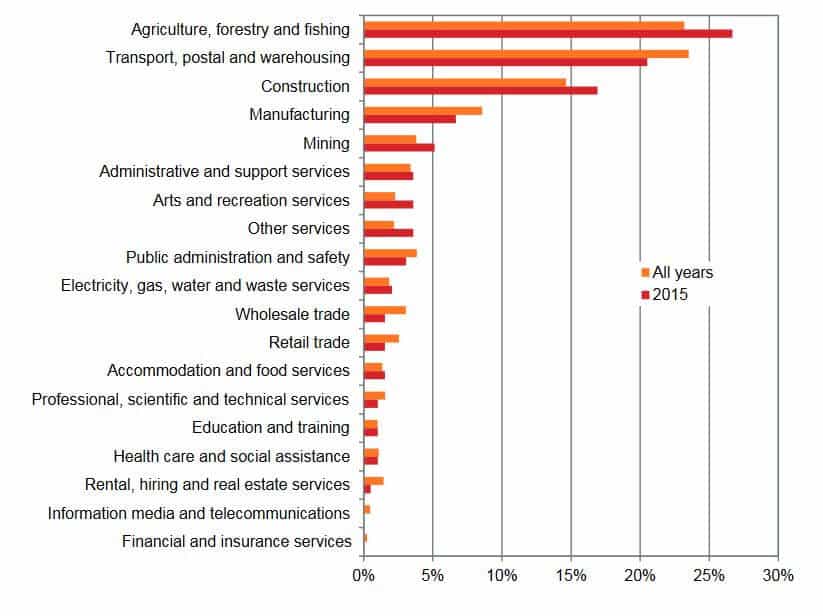 Figure 2. Worker fatalities: proportion by industry of employer, all years (2003 to 2015 combined) and 2015. Source – www.safeworkaustralia.gov.au/system/files/documents/1702/work-related-traumatic-injury-fatalities.pdf.

According to the report, when considered on fatality rate (fatalities per 100,000 workers), agriculture, forestry and fishing have almost consistently had the highest rate since 2003, with an overall rate of 17 deaths per 100,000.

The report also notes that agriculture is one of the few priority industries (agriculture, transport and construction) where fatality rates have not decreased. Instead, they have remained close to 15 fatalities/100,000 workers for much of 2003-2015.

Narrowing by industry and how (Table 1), for the fruit and tree nut growing industry, the rollover of non-road vehicles produced the highest number of fatalities between 2003 and 2015, followed by being trapped between stationary and moving objects (six) and then vehicle collisions and being hit by moving objects (five fatalities each). 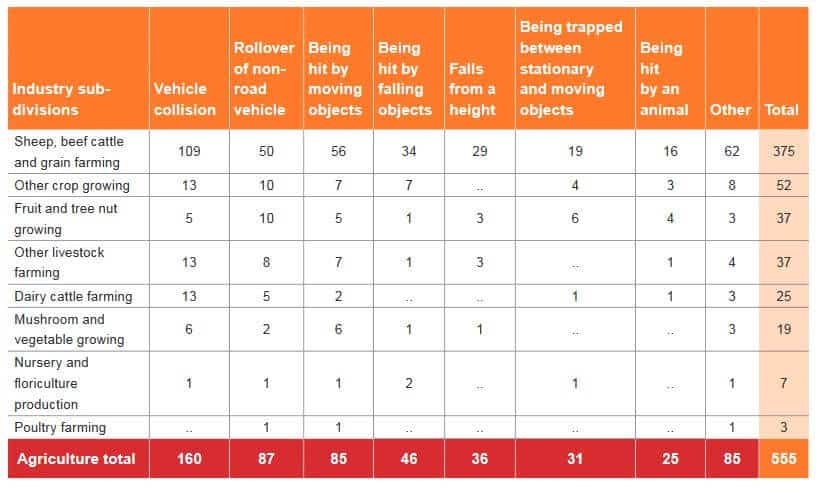 Another aspect to the statistics comes from Safe Work Australia’s Work-related injuries and fatalities on Australian farms, March 2013.

The analysis profiles the 356 fatalities that occurred on farms in the eight years to 2010-11 and found males accounted for 92 percent of the fatalities, and there was an increasing proportion of worker fatalities with age.

“Workers aged 65 years and over accounted for 30 percent of all fatalities on farms in the eight years. This is nearly three times the proportion this age group represents of all worker fatalities,” the report said.

“For the 55–64 years age group similar proportions were recorded for those working on farms and for all workers, while for all younger age groups the proportion of deaths occurring on farms was lower than for all workers. These data show that there is a greater risk of death for older workers on farms than for the wider working population.”

This article was included in the Guacamole newsletter of 21 July 2017.